It is with a great deal of satisfaction that I can now announce the completion of the LITTLE BOY AND CURLY TOP AND THE BITING BURS book for children with pediatric cancer. It is believed that this story, which deals factually with the workings of the immune system , coupled with a follow-on CD of Guided Imagery is the first work of its kind ever before produced.

The story of how this book came to be is right from the heart of human interest. The idea for this project actually came from several people who have benefited from my work with adult cancers and my website. Having no background in writing for children I was at first reluctant. Finally, one day (perhaps I should say once upon a time), I had two messages come to me again asking me to look at the possibility of writing this book. One of these was from a lady whose child has a severe form of pediatric cancer and the other, an English lady who was pleased with my book and CD for her cancer. Her name was Milne and, sure enough , she was a distant relative of AA Milne who wrote Winnie The Pooh, a favorite of mine since childhood. This seemed to be just too much of a coincidence to be ignored so I set out to the task. After much discussion with several of these exceptional patients we finally decided that a book and complementary CD of Guided Imagery for children would be appropriate provided we could accomplish the following objectives.

First, it must be a good enough story that it will stand alone as one children will enjoy, without regard to the healing aspects. From early feedback and, in particular, the opinion of the Milne lady, we believe that this objective has been achieved. A good review of a children’s story from persons in the “100 Akre Woods” is pleasing, indeed. THERE IS NO LAW OF NATURE THAT SAYS THAT HEALING CAN’T BE FUN! We explain the concept of guided imagery by relating it to a Safari through the jungles. The GUIDE, (the voice on the tape) gives the general directions but it is the EXPLORER ( the patient, who is the listener), who makes the DISCOVERIES. It is worth noting a further difference – a person who sets out on an itinerary where the beginning and end points are already known is merely a TRAVELER. A person who sets out on a journey of adventure where the destination is not know is an EXPLORER. The CD is crafted to pick up where the book ends with a personal journey wherein they will explore relaxation, peace of mind and healing.

Second, it must be such that the child reading it will be practicing an effective program of cancer killing Guided Imagery without being aware he/she is even doing it. Again, we believe this specification has been met. Albert Einstein once said, “Our knowledge has its limitations, our imagination has none, therefore it is the greater of the two!”. The images contained in the pretty color illustrations take the children along an exciting, perfectly safe journey through the wonderland of imagination where they meet some new friends who are ready and willing to help them on their healing journey.

Third, we never, in the story or CD, mention the word cancer. This is to protect the child from previously acquired fears or what I have come to call “Negative Imagery”. Furthermore, by not making is appear to be cancer specific, it is conceivable that this program of guided imagery could be useful for children with other diseases as well.

As with previous ones, the CD is prepared with the embedded Alpha Wave for resonant tuning with the subconscious mind. One advantage of working in the subconscious right brain is that it never sleeps. This means that the child can benefit from doing the imagery exercise while sleeping. Those of us who have raised children can well appreciate that getting these rambunctious little one to calm down for very long can be difficult if not impossible. Even the most restless ones eventually have to sleep and, as many adults have reported, that can be a very effective time to listen to the guide.

This amounts to breaking new ground in an exciting venture. I have no way of knowing what the outcome of this effort will be but it seems to me that If we can manage even a 10% alleviation of children’s cancers, this would mean restoring a future to thousands of pitiful little children. Evidence with adults using the Alpha Wave modulated CD of Guided Imagery suggests that the achievable number may be much, much higher than that. At the outset, I deemed that if but one child were helped by this little book to avoid a tragic, unnecessary death that it would be worth whatever it costs. I have already heard enough from grateful parents to more than make me grateful that i was presented with the opportunity to do this thing. These are the treasures that one can, indeed, take with him! 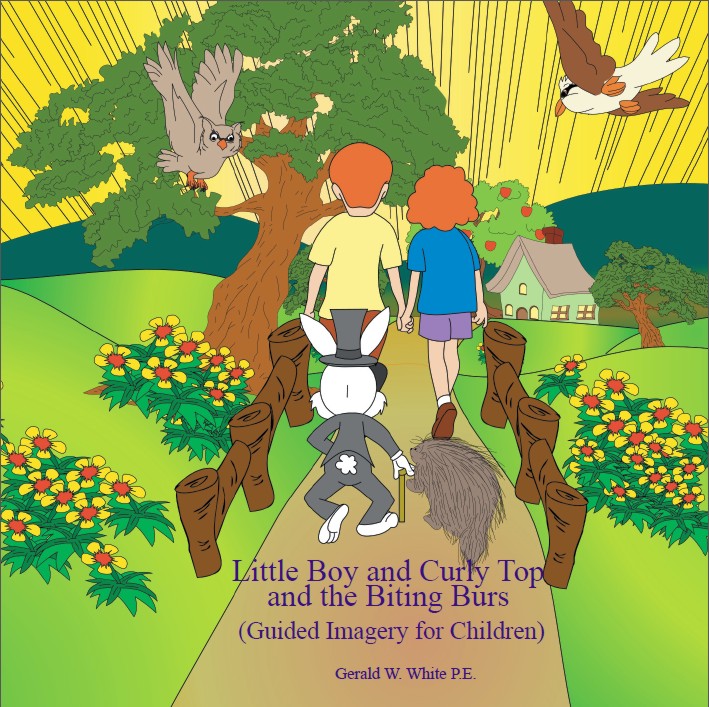 “Little Boy and Curly Top and the Bitings Burs”.Please see the order page to obtain your copy.