CEREBRAL PALSY AND OTHER FORMS OF TRAUMA

Sometimes the decision to enter into a brand new field of human trauma comes about as merely the desire to help a friend. This was the case with CP and, more recently, other forms of trauma. As one might expect, some of the more “miraculous” seeming successes with cancer patients have led to expanded interest in guided imagery on the part of some of those who observed these successes unfolding. Many times over the years have come inquiries as to the possibility of using it for other ailments, some of which continue to baffle medical science. The questions usually start out; “If guided imagery can be used to defeat cancer, why can’t it be used to defeat —“.

While there is some logical basis for such a question, it , nevertheless puts the imagery advocate in the uncomfortable position of having to work in an area of total unfamiliarity and without any real license to be there in the first place. Such was the case with a little girl afflicted from birth with cerebral palsy. Her grandmother, a lifelong friend from school days, kept insisting that this should be pursued and I kept refusing as I knew nothing about the disease. She kept on pointing out that those who do know about it have not been able to offer the child any relief or hope for the 11 painful years of her life and that I did have quite a background in imagery that she felt qualified me to take on the task. She further pointed out that there seemed nothing to lose as they presently had no hope whatsoever for a cure. It was in response to this continual, poignant persistence that I decided to have a go at it, knowing full well that there would be an enormous lot of work to be done with no real assurance of success. It was necessary to produce a CD of imagery specifically for traumas and then go through the process of modulating the voice and background music tracks with the subliminal Alpha wave to enhance communication with the subconscious right brain – and all for this one little girl. This was a quintessential labor of love.

What ultimately transpired is little short of miraculous. Unknown to me, the family had decided to suspend normal physical therapy for the duration of the imagery experience. I would never have recommended this but, as it turned out, it provided a dramatic punctuation of the effectiveness of the imagery program. In the new book, BUILDING BRIDGES OVER TRAUMA, the story is presented in detail with accompanying photos that are undeniable. Six weeks into the imagery program, her arm was observed to start relaxing into a near normal position with any verbal coaching or manipulation. Ten weeks into the program, her arm is now behaving very nearly normal without any further coaching.

SUMMARY AND OBSERVATIONS FROM WORK WITH TARYN GLENN

Perhaps the most dramatic results obtained to date from one of the new Alpha Wave Modulated CDs for guided imagery were those from a case involving an 11 year old girl with cerebral palsy. The following summary is presented here for the interest of readers who are struggling with cancer and other of the various forms of trauma in the hope of establishing credibility to the extent that minds can be opened to possibilities. The hoped for logical conclusion to these results is that if one can be helped by a well crafted and personalized program of guided imagery then a multitude can. If no benefit other than some peace of mind and a good night’s sleep be forthcoming, then this is, itself, of great value, especially when it come in a patient friendly environment at no expense.

Taryn Fayth Glenn of Canyon, Texas was diagnosed with Cerebral Palsy at age 18 months by Dr Brown, a Pediatric Neurosurgeon in Lubbock, Texas. An MRI done in 2002 confirmed Right Hemiparesis. The accompanying photographs give somewhat of a chronological account of how this trauma has affected her throughout the intervening years. There is a lifelong relationship between her family and the family of Gerald White that dates back to the terrible “dust bowl” years of the thirties when our families lived on adjoining farms. Taryn was introduced to the subject of Guided Imagery by her grandmother who was very familiar with some of the “miracle” cancer remissions that she had seen occur for those using this technique. After initially rejecting the idea out of total unfamiliarity with CP, White decided to get involved to the full extent of producing a CD of guided imagery designed to help Taryn overcome the debilitating effects of the birth defect.

There was never any intent to press this to a large patient population, just the notion that if we never did any more than help this one little girl to a life free of the effects of trauma then this would make it worthwhile. This is sometimes expressed as “Keep it simple – make it fun”. It is acknowledged that she has been on the program a very short time. Nevertheless, some noteworthy observations now beg to be presented. The story of the last few months is shown in the photos at the end of the summary. 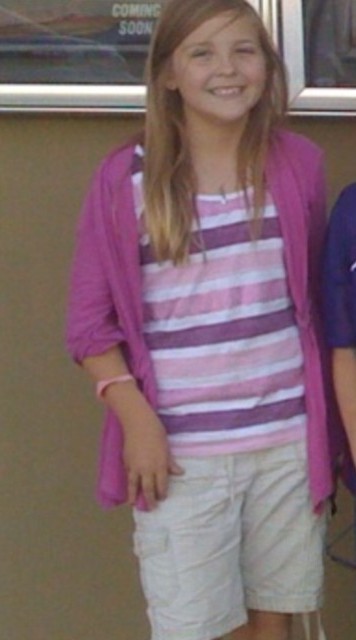 Image 1, Little Taryn Glenn at age 6. The arm is permanently curled to her waist, even in the relaxed position and she has had to live with this since birth. 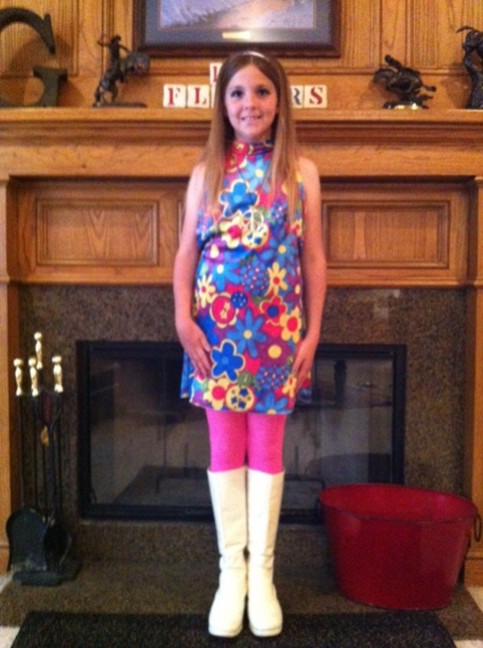 Image 2, Fall of 2011. Notice how her arm is at her waist and her fingers are curled. This is the situation before the imagery started. 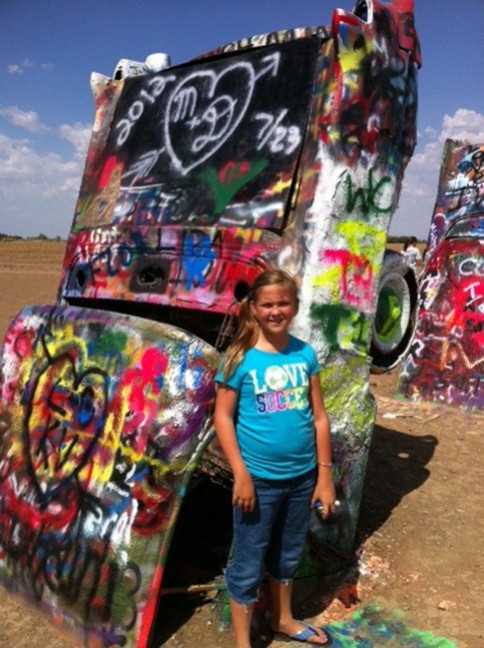 Image 3. July 23, 2012 On an outing to visit the famous “Cadillac Ranch” at Amarillo with friends. This was after 6 weeks of listening to the CD of BUILDING BRIDGES OVER TRAUMA. The importance of this photo is that it shows the right arm relaxed downward and the fingers straight. This was without any verbal coaching and is attributed directly to the beneficial effects of guided imagery since there was no other therapy applied during this time frame. This was after 6 weeks of imagery and no therapy. 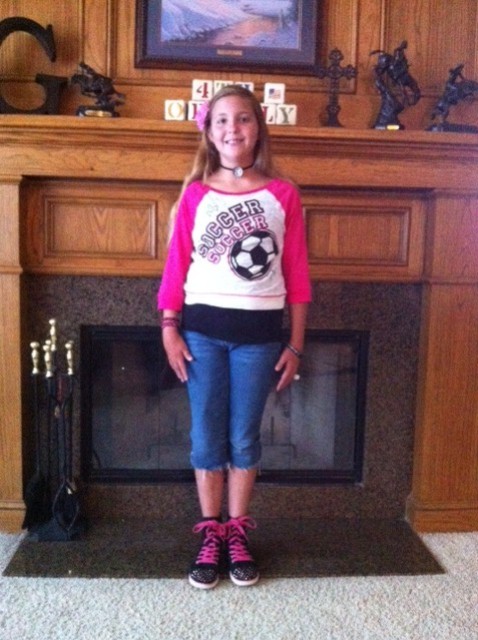 Image 4. August 4, 2012. This current photo shows clearly how she is holding her arm in its normal, downward relaxed position. The fingers are noticeably straightened after 10 weeks of imagery and no other treatment.

One question has been put to rest by the results to date. That was the natural concern about whether or not an 11 year old child would accept the responsibility for doing the exercise faithfully every night. Taryn has plunged into the program with enthusiasm and refers to “turning on Jerry every night as she prepares for sleep”. As some expected, a young mind, uncluttered with the junk of flawed assertions and information, seems to actually have an advantage in this field.

Perhaps the best and most qualified observer is Stacy, the mother. Stacy is quite well pleased with what she sees as undeniable progress. This is understandable since she has watched this beautiful child walk around with her right arm curled at the waist instead of enjoying normal swinging movement for all her life. I don’t think I know how to quantify this to the satisfaction of skeptics both within and without the medical community. I am only trying as best I can to relate the joy that this family is feeling and expressing. Little fingers that had previously been curled are open to receive new opportunities. Hope lives here again. Best of all evaluations is the one that Taryn gives in her own words as follows:

“I do like the guided imagery program. Now that we have been doing it for a while, my hand and arm are not as tight as they have been in the past, even when I do all the daily exercises (which I hate). I know these exercises are good for me but they are painful while the CD program is relaxing and Jerry lulls me into sleep.

I have laid off the nightly exercises that I do with my dad since back in May when I first started listening to the CD. We tried them again tonight and were pleasantly surprised to see that I had not lost any ground due to the layoff. Before imagery, when we would skip a long time, I would be very tight and lost a lot of ground. I lost none which makes us wonder if we should not just do both in the future as they do seem to go together. As far as how I feel in going about my daily routine since starting the guided imagery – I feel stronger and more confident”.

Ten weeks into the program, her arm is now behaving nearly normal, without any further coaching. Taryn’s own words, quoted above, appear to tell it all. As to what the future might hold for this patient friendly and cost free treatment modality, only time will tell. What can be said for sure is that a door has suddenly and unexpectedly cracked open and a ray of light has begun to shine into the arena of cerebral palsy that brings hope where hope had previously failed.

As the name of the book implies, we are reaching far into the subconscious to give instructions to help deal with traumas in general. For this work, we define traumas as any thing that attacks or insults any of what we have defined as the “Health Rings” of mind, body and soul. This could be such things as CP, PTSD, injury, assaults such as rape or anything that puts up barriers to healthy communications throughout the autonomic or central nervous system. Guided Imagery, as a treatment modality, is patient friendly, non invasive, self scheduled in the privacy of the users home, with no undesirable side effects and, perhaps best of all, nobody will ever send you a bill for it.

There is a Booklet and CD combo available on the Order Page on this website for those who wish to pursue this exciting new treatment modality. The book gives the “why” and the CD is the “how” for using Guided Imagery to help anyone on the healing journey. You will find it patient friendly, non invasive, self scheduled, self administered in the privacy of your home and nobody will ever send you a bill for a treatment program. In our introduction to a new cancer patient we ask, “What do you have to lose except the cancer?’. There is every indication that the same may be apropos for CP, MS or trauma. I urge anyone currently in the struggle with these issues to join us in this pioneering journey of exploration into an exciting new world of healing possibilities. Others have done it and so can you. It IS possible.