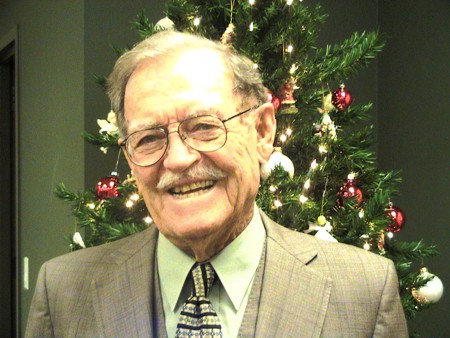 THE CHRISTMAS THEY SAID I WOULDN’T LIVE TO SEE

Hello, my name is Charles Rex Covert and I am a 90 year old survivor of
colo-rectal cancer and I would like to share my story. In June of 2011,
I was diagnosed with stage 4 colorectal cancer. My life immediately spun
out of control with bewildering things happening at a furious pace. I
had a medport installed and was subjected to 27 days of chemo and 23
radiation treatments all of which left me depleted and in terrible shape
virtually bedfast. they wanted to increase the dose rate but I said
“No- I can’t stand this anymore”. Things then began to move toward what
seemed like a death watch with the hospice nurses entering the picture.
One day my wife, Peggy, needed to go to town for supplies but , my
condition was so bad she didn’t want to leave me. I then remembered a
friend and brother Shriner, Jerry White once telling me that if I needed
him he would come. So, we called him and he did come right away. He
looked at me for a while as we visited.
Then he began to tell me about the world of mind/body medicine and
guided imagery. He even gave me a proof copy of a new CD which he told
me was the very latest thing with the frequency of the right brain embed
into the voice and music tracks for perfect tuning with the subconscious
mind. He told me things the doctors had not about the wonders of the
human immune system and ways that I could put it to use in the privacy
of my own home and that I still had a lot of control over my outcome.
I kept fading “in and out” of the conversation , due to the high level
of pain killers, as he kept on talking to me. I couldn’t tell if he
were talking to me or to God. I was really confused but finally I began
to listen with more intensity. All of a sudden it felt as if my brain
had parted open and a shaft of light came in . Then I saw a black door
and lots of other things literally fly away out of my brain. I asked
Jerry, “What’s happening?” and he said “You are getting rid of those
anxieties, hatreds, fears and other bad things that have, over the
years, come uninvited into your mind and consciousness. I believe God
is coming into your body to heal you”. At that point, I don’t know
why, but I started crying. I am not normally a crying person, but I
just couldn’t stop crying. He put his arms around me and, when I
finally stopped crying, he said, “Don’t you feel better now” and I said
“I’ve never felt better in my life”.
From then on I got on my imagery program with focus. I stopped taking
all those pills, pain included, my appetite came back and I began to
stand up and walk about and from that point on it could only be called
miraculous. A recent PET scan shows no cancer. I can’t thank Jerry
and his MAARS program enough for helping me navigate these dark waters.
I have walked through the darkest part of the valley of the shadow of
death and have come out the other end to praise God for miracles. It is
my opinion that Jerry is acting in the role of a Disciple of the Lord
and has a true gift of healing. We do read about such things in the
scriptures.
I hope this story will give others, struggling in the dark valley as I
was. a fact based reason to hope. As Jerry wrote when he autographed my
book; “It IS possible! You CAN defeat cancer!!