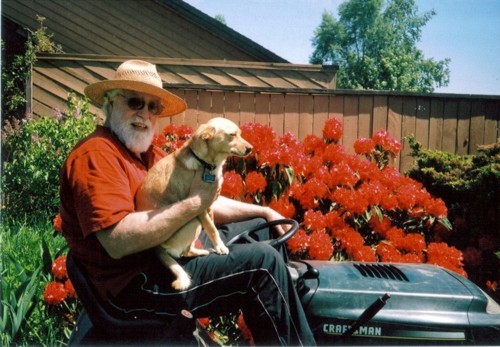 Richard Catlett – Showing off his Rhodies

I am a 71 year old retiree up here in the Northwest in the town of Port Angeles. April 17, 2007 at 9:45 AM I went out to get my riding mower to catch up on the Spring grass on my 2 1/2 acres. I never got to the mower shed. My leg snapped in half just above the left knee. That started me off on this Kidney Cancer Odyessy. My new life began. After emergency surgery at the local hospital to stabilize the leg, a biopsy was done on the material removed during the surgery. I was told “no cancer”. Five weeks later, after the bone had failed to heal, my othopedic surgeon referred me to a local Oncologist who ordered another biopsy, found clear cell carcinoma, then ordered CT scans and found a 10.4 CM tumor in the left kidney.

I was Stage IV and my Drs. gave me the sad news that my median life expectancy was 12 weeks, chance at 5 years; zero. My local Onc. didn’t think I was strong enough to do the ride to Seattle and have HD IL2 and I wasn’t feeling strong enough to make the trip for surgery with the broken leg so we started Sutent. It worked surprisingly well for me and I started feeling better, although the leg was still not healing. By May of 2008 in spite of the side effects, I was feeling strong enough to have an Orthopedic Oncologist in Seattle take out the rod and pins, the diseased portion of my femur and totally replace my left knee. I am gradually making that leg stronger through intensive therapy and exercise, but still using a cane. I continued taking Sutent until Dec. of 2008 and then had my left kidney and adrenal removed. ‘ It had shrunk to manageable 6.4 CM and a small second met on my pubic bone had disappeared. I elected not to take any drugs after the surgery, although there is some speculation that Sutent may be effective a Ajuvant therapy. I am hoping to control any recurring disease with diet, exercise and mind/body visualization, but would go back to Sutent or one of the other targeted therapies if the disease rears it’s ugly head. I was without any active disease for 13 months after the Nephrectomy, then had a paratracheal node begin to grow and I had that removed in April 1, 2010. I have been without any visinble disease since then.

So that’s my story; and I’m stickin’ to it. Each breath is a gift. My old life was gone: Athlete, outdoorsman, fisherman, golfer, gardener and physical fitness buff. I’m still hacking away on the guitar and doing what I can in the garden, and I’ve learned let others help me with the physical things I can no longer do. I spend a lot more time on the computer learning about kidney cancer. I read a lot more, and bought myself a 42 inch HDTV so I could watch NCAA Basketball (I’m a big fan). I still do what I can at the gym and I’m proud of the fact that I can walk my little dog “Chloe” a half mile with the cane. I meditate and use visualization every night for a half hour. I’ve been using Gerald White’s CD and book “Three Months to Life” as a base for this for the past three years, and so far it seems to work. It sets my mind in a positive direction and I am relaxed, sleep soundly and wake up refreshed. I never expected to make five years survival, but I’m almost there and life is good.