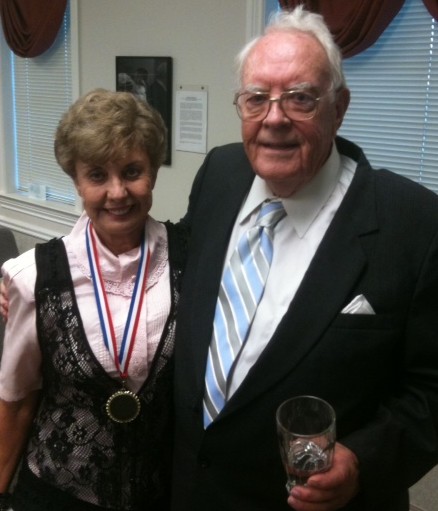 On June 9, 2011, I awoke at 3:45 AM feeling as though I had slept wrong on my neck, there were lumps and swelling that had not been there when I went to bed. No Warning!! Before the sun set that evening I had seen my primary care Dr., had a CT Scan, and was anxiously awaiting the results. The next morning the call came from a very caring Dr., “Joyce we believe you have lymphoma. The good news is, it is Very Slow Growing and very treatable, the bad news is, it is incurable”. Dr. Bishop said he had already made an appointment with his personal surgeon to see me and I was to be in his office first thing Monday morning. Tuesday morning I was in the hospital having lymph nodes removed for biopsy. The tests showed B Cell follicular lymphoma involving the chest, left side of my neck, right pectoral muscle and left arm pit. The surgeon called said he had scheduled me to have a medi-port installed.

Needless to say, I felt like I was caught in the eye of a tornado. I called the surgeon’s office and cancelled the medi-port, telling them I would be back in touch after I found an oncologist. At this point my first stop was Gerald White’s home. Jerry has been a friend for many years and after telling him my story I left with his book and CD in hand and I began to feel like, OK I am back in charge of my life and all I have to do is try my best to make good decisions and educate myself about this disease which I knew NOTHING about. One thing that is worth noting here is that the day after I met with Jerry, my surgeon had me scheduled for installing a sub-clavial med port which he said my oncologist would surely want. Jerry thought this was woefully premature since I didn’t even have an oncologist at the time and therefore had no way of knowing what the oncologist would want. The only thing for certain was that I would have to undergo an operation, wear a very uncomfortable appendage for no verifiable reason for an indefinite time and run the risk of infection. My first really “take charge” decision came the next day when I called the surgeon and cancelled his procedure. My oncologist later commended me for a wise decision. I began my search of an Oncologist, lots of prayer, talking to friends, checking Doctors out on the internet and talking to Dr. Bishop. In the meantime, I was reading Jerry’s book and faithfully listening to the CD one hour as I went to bed and waking up about 6:30AM putting on my earphones (to not disturb my husband) and listening again for about another hour before I got up to start my day. So basically I began by day and ended my day with the CD.

I found a good Oncologist, had additional blood work, a Pet Scan, Bone marrow test. All confirmed the original diagnosis. I had explained to the Dr. during our first meeting that I would want a second opinion regardless of the outcome. I went in search of a second Oncologist and settled on UT Southwestern Simmons Cancer Center and was assigned to Dr. Harris Naina, a lymphoma specialist on their campus in downtown Dallas. My appt. with Dr. Naina on August 3rd was successful and I decided I liked having all the tests done on one campus and numerous Dr.s with access to my information. After approximately 300 hours of Guided Imagery and Lots of prayer, I had a second Pet Scan November 23rd. I saw Dr. Naina today November 29, 2011 for the results.

NO CANCER in the Chest area, Neck, or right Pectoral muscle. The Only cancer activity is in the left armpit. I have no doubt that will be gone by the next Pet Scan in August 2012.

I have had no Chemo or any other treatment, just prayer and guided imagery. My doctor expressed great interest in just exactly what I had done since I had taken no treatment. I played the MAARS imagery right back at him and as I explained the workings of the macrophages, neutraphils, T and NK cells, he looked absolutely amazed. He even said that if I had, indeed, wiped out the residual cancer by the next PET scan, he would like for me to come and make a talk to the staff. What a perfect ending to a perfect day!